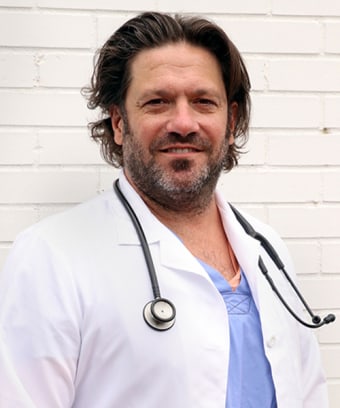 Dr. Kevin Schabbing developed an early interest for Veterinary medicine by assisting his father who was a large animal veterinarian in southeast Missouri. Dr. Schabbing is a 2004 graduate of St. George’s University. He has completed both a rotating internship in 2005 and an Internal Medicine residency here at Atlantic Coast New York Veterinary Specialists in 2013. Dr. Schabbing has published two case reports describing a rare cardiac myxosarcoma in a dog and an original surgical technique in dogs with brachiocephalic syndrome and laryngeal obstruction. He has particular interests in gastrointestinal, autoimmune, and infectious diseases.

In July of 2020, Dr. Schabbing began a cardiology residency with Atlantic Coast New York Veterinary Specialists under the guidance of Ultravet Mobile’s founder, Dr. George Kramer. He has a strong desire to help both people and pets. Dr. Schabbing characterizes his work style as focusing on honesty with realistic expectations. He is no stranger to challenging cases, and works diligently on those where a diagnosis remains elusive. Nonetheless, his commitment to both the patient and owner remains his highest priority. In his spare time, Dr. Schabbing enjoys hiking with his two Australian cattle dogs and spending time with his family.

See What Our Clients Are Saying